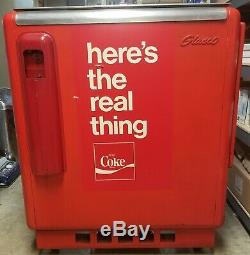 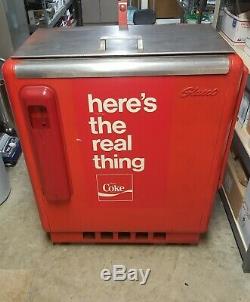 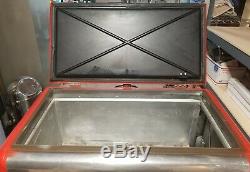 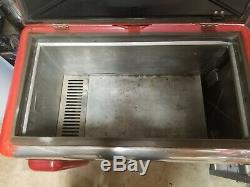 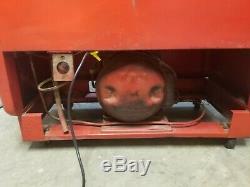 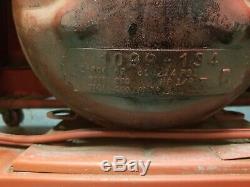 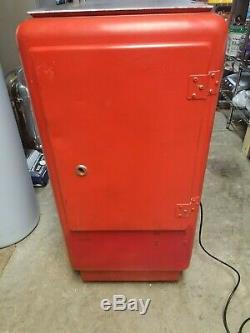 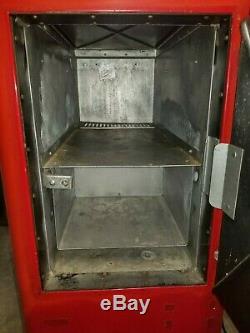 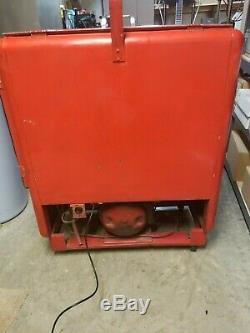 Glasco GBV50 Coca Cola Machine. Cooler is in good shape. Founded in 1892, Glascock Bros. In 1928, though, Coca-Cola asked the Muncie, Indiana company to produce a specialized cooler it could sell to retailers. The GBV-50 marked Glascos re-entry into bottle vending after the company spent many years producing vendors that dispensed pre-mixed soda into cups.

Glascock produced many variations of soda coolers for Coca-Cola, as well as other brands, and the Glasco GBV-50 definitely stands out. Labeled Starlet, this model was advertised as The Brightest of Bottle Vendors and was designed to conquer space' due to its compact size. Produced from 1959 to the early 1960s, the Starlet could vend 50 bottles of cold Coca-Cola while it pre-cooled another 25. This is a slider unit. Since the bottles were loaded into five rows, the slider was able to vend up to five different flavors in bottles of different sizes. This machine took dimes, and after one was deposited sliders worked manually by sliding the bottle down the rack to release it from the machine. Pre-cooled bottles were accessible by a door on the side of the machine. Emblazoned with the fishtail logo, which was used from 58 to 65, the Starlet weighed 230 pounds. It measured 35-1/2 wide by 20-1/2 deep by 40-1/2 high. The item "Glasco GBV50 Coca Cola Machine" is in sale since Saturday, July 13, 2019.

This item is in the category "Collectibles\Banks, Registers & Vending\Vending Machines\Soda". The seller is "rlenga" and is located in Amelia, Ohio. This item can't be shipped, the buyer must pick up the item.