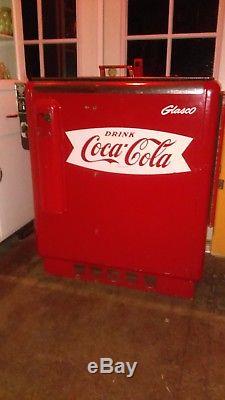 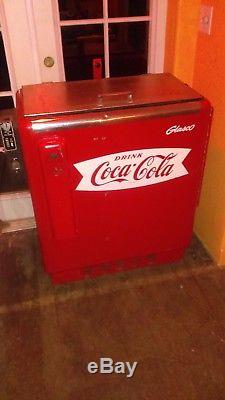 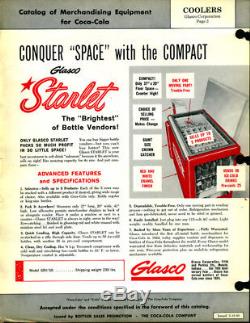 It was restored to original condition, but without the Glasco logo and we painted the cap catcher black, rather than red. We have replicated the classic Coca-Cola fishtail logo used from 1958 to 1965. Glasco actually began as the Glascock Brothers Manufacturing Company, a company that was founded in 1892 to build washing machines. In 1929 they produced their first Coca-Cola cooler.

It was a cooler that held 72 bottles of Coke that was cooled with ice. It had space below to hold 3 additional cases of soda.

The Standard, as it was called, was the first mass-produced Coca-Cola cooler. Because of this, Glascock is often referred to as the grandfather of all Coca-Cola vending machines. The company name was changed to the Glasco Corporation in the 1930s. Through the early 1960s, Glasco only made soda vending machines for the Coca-Cola Company.

The Universal Match Company acquired Glasco in the 1960s. The GBV-50 was a very significant vending machine for the Glasco Corporation.

It marked their re-entry into the bottle vending business after dedicating several years to producing vendors that dispensed pre-mixed Coca-Cola into cups. The Glasco 50 was manufactured from the late 1950s to the early 1960s. The Glasco 50 was built for dispensing bottles of Coca-Cola.

This machine operated manually by opening the lid and sliding the bottle to the opening in order to remove it. The bottle was released once the coin was deposited into the coin box. This is a slider-style chest cooler that had the capacity to dispense 50 bottles and pre-cool 25.

It was a dry cooler that used a compressor to cool the drinks. It was intended to hold a fair amount of product without taking up a lot of floor space as you can see in the brochure page. It was touted as being both compact and counter-high. It was also promoted as a soda vendor that could hold up to five different products.

The slider had 5 rows that could each be filled with a different drink selection. It could hold regular or king-size bottles. A very similar looking slider vendor had been introduced a few years earlier by the Ideal Dispenser Company. Where Glasco manufactured soda vendors exclusively for Coca-Cola, Ideal made machines for all the other soda manufacturers except Coca-Cola, with an exception.

Ideal manufactured an Ideal 55 slider embossed with Drink Coca-Cola in Bottles in the late 1950s. It was the only machine they made for Coca-Cola, and therefore, is very rare.

The Coca-Cola coolers were not embossed, while the Ideal 55B coolers were. The item "Glasco Starlet 55 Coca Cola Vending Machine" is in sale since Wednesday, December 27, 2017. This item is in the category "Collectibles\Banks, Registers & Vending\Vending Machines\Soda".

The seller is "bergantiques1965" and is located in Stanwood, Washington. This item can't be shipped, the buyer must pick up the item.