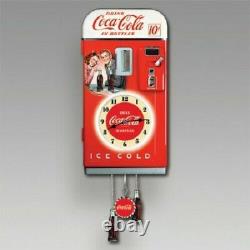 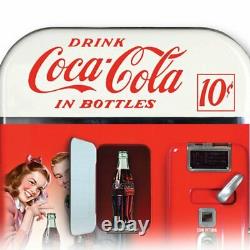 Few eras in the rich history of COCA-COLA® are recalled more fondly than the 1950s, the heyday of classic vending machines that delivered the drink with style! Authentically handcrafted in the style of a 50s COKE® vending machine, this unique COCA-COLA clock recalls the sights, sounds and memories of the beloved originals.

This one-of-a-kind COCA-COLA wall clock features a classic COCA-COLA logo clock face, ringed by glowing neon-look LED lights. In the style of traditional cuckoo clocks, a COKE bottle emerges from the door and the "pop, fizz" of a bottle opening sounds on the hour.

The COCA-COLA logo, artwork and lettering, plus sculpted coin return, bottle opener and more add nostalgic appeal to this COCA-COLA vending machine clock. Powered by a precision quartz movement, this accurate expertly made timepiece even includes sculpted COKE bottle weights Comes with a pendulum but not a coca cola one. The item "RARE Coca-Cola Lighted Vending Machine Cuckoo Clock" is in sale since Sunday, February 14, 2021. This item is in the category "Collectibles\Advertising\Soda\Coca-Cola\Clocks & Radios".

The seller is "melodymeadow" and is located in Millbury, Massachusetts. This item can be shipped worldwide.