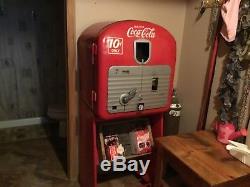 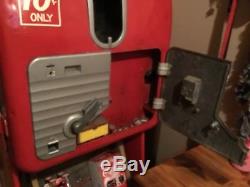 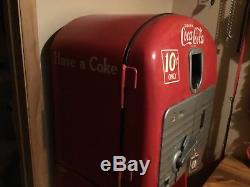 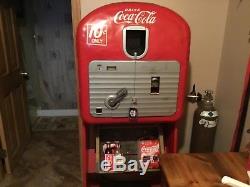 Antique Vendorlator 27 Coke Machine with stand. The VMC 27 is the smallest soda machine made by Vendorlator.

It is only 27 inches high and dispenses 27 6.5 ounce bottles. It had space to pre-cool 10 bottles. It is one of the smallest Coca-Cola soda machines ever made. It's called the "Tabletop" because it could be placed on a counter.

There were a variety of stands made for it, including a pipe stand made by Vendorlator, an all metal stand as in picture and an all-wood stand made by Kay Display Products. These machines were made between 1948 and 1951.

Pictured here is a VMC 27. Dimensions: 19"D x 24"W x 27H (without stand). VENDORLATOR is not to be confused with the Vendo Company.

The Vendorlator Manufacturing Company (VMC) was located in Fresno, California. They emerged from WWII as a strong competitor to companies such as Mills and Jacobs, with their upright Model 242. While advertising by the company, dated 1948, claimed that the Model 242 was "backed by 13 years of field testing" it is their post-war machines that are collectible today. Large models like the 242 were good sellers for the company, over 4,000 units were in 1946 alone. The year 1948 saw Vendorlator introduce one of the smallest Coke machines ever.

Also optional was a coin changer kit for returning a nickel change when a dime was used. The immediate popularity of the 27 prompted Vendorlator to open a third plant in Picqua, Ohio in April, 1949, in addition to the two plants they already had in Fresno. Vending only 27 six ounce bottles arranged in a rotating drum, two bottles in each of fourteen compartments less one, this machine ws best suited for low traffic areas. The fact that the cabinet of this machine was made of aluminum (although steel versions were also made) helps to explain why this model is often found with dents, particularly around the bottle chute where someone tried to coax out a stubborn bottle. This extremely small upright machine used the same vending mechanism as the countertop Model 27 but had a 27 bottle pre-cool capacity, hence, the designation Dual 27.

It also used a more conventional arrangement for the refrigeration unit with the condenser housed in the bottom of the machine. Its new found popularity led to the discontinuance of the 27 about a year later. Subsequently, the Dual 27 was dropped from Vendorlator's line by 1954 and replaced by the Model 33, with a slightly modified bottle drum allowing for six more bottle capacity.

The physical size was he same as the Dual 27 with the only outside distiquishing feature being a one piece coin door, although two piece "split door" versions are also known. The item "Vintage Coca Cola Machine 1948 Vendorlator Model" is in sale since Wednesday, June 13, 2018. This item is in the category "Collectibles\Banks, Registers & Vending\Vending Machines\Soda".

The seller is "lyndac918" and is located in Newark, Ohio. This item can't be shipped, the buyer must pick up the item.